This heritage line is the second longest in the UK and traverses the moors from Pickering to Whitby passing through Levisham, Newton Dale, Goathland and Grosmont on its way.
The railway line was planned by George Stephenson in 1831 as a way of connecting the coastal town of Whitby with trading routes inland and first opened in 1836. For the first few years it was only used by horse-drawn carriages, then in 1845 reconstruction work allowed steam locomotives on it for the first time. These locomotives could not ascend the Beckhole Incline so it was equipped with a steam powered stationary engine and iron rope to help them up.As the rail system developed this system was increasing unable to cope so an alternate route which opened in 1865.

In 1965 the railway was closed due to being uneconomical. However in In 1967, the NYMR Preservation Society was formed, and negotiations began for the purchase of the line. In the early 1970’s it became a Charitable Trust (to ensure the future of the railway) and became The North York Moors Historical Railway Trust Ltd. The railway reopen for running in 1973 as the North Yorkshire Moors Railway. The North Yorkshire Moors Railway is now a major tourist attraction for the area.

The War-Time Weekend is a demonstration of the operation of railways in the UK during the Second World War. The stations are decorated to appear as they would in war time.

On a Day Out With Thomas, the engines are transformed to resemble the fictional characters from Thomas the Tank Engine and Friends.

Other special events include a vintage vehicle weekend, music on the moors and the wizard weekend.

The Stations on the line are:

Pickering, recently been restored to its 1937 condition with help from the Heritage Lottery Fund. A park-and-ride service is provided to keep traffic out of the town during busy periods.

Levisham railway station is a small countryside station set in the scenic Newton Dale valley. The area is ideal for walking and a wide variety of wildlife and flowers.

Goathland station is famous as “Hogwarts” in the Harry Potter stories and the village as “Aidensfield” in the Heartbeat TV series.

Grosmont railway station is the old northern terminus, and houses the locomotive sheds. It has facilities to provide water and coal for the engines and is used for the maintenance and overhaul of the engines.

Whitby is the northern terminus of the NYMR. With regular trains to Whitby from Pickering throughout the year. 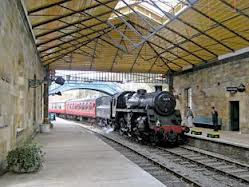 Covid-19 Update: Our reassurance to you. Read More